Ryan a reliably conservative vote, somewhat to the right of the GOP center, very moderate compared to Ron Paul

I’m trying to transition towards non-partisan analysis as we get close to the general election now, especially with the national conventions just a couple of weeks away. Towards that end, I plan to write a story about Paul Ryan next week. Less of what I think of him, and more about what kind of baggage he just added (or didn’t add) to the Romney campaign.

I can tell you right now that I’m not high on this choice. Ryan has very little national name recognition, has never run or won a statewide race, and doesn’t bring enough support with him to put Wisconsin in play. In addition to that non-existent upside, Mitt Romney tried very hard to avoid taking a firm stance on Ryan’s plans for Medicare and Social Security, but now he’s got those plans hung around his neck no matter how long and hard he tries to expel them from his campaign.

In service of that analysis, one of the first things I looked up was Paul Ryan’s DW-Nominate score, which is a number ranging from 1 to -1, based on the voting record of a person in Congress. 0 would be an absolute moderate, and 1 and -1 would be a pure ideologue.

I was really excited to find that someone came out with a system for rating judges that directly correlates with DW-Nominate, but that’s for another day.

What I found about Ryan didn’t surprise me. He’s above average in his caucus, ideologically indistinguishable from, say, a Michele Bachmann. He’s not quite a moderate within his own party, and not even close overall. Nor is he an extremist:

But that’s where I got kind of sidetracked.

It makes you wonder how much better he might have done with the base, had Paul dedicated his campaign to publicizing his voting record, rather than trying to stand out on his libertarian issues. This makes clear that with the exception of a few moderate views, Ron Paul is an exceptionally pure conservative. More conservative than George W. Bush, Rick Santoum, Dick Cheney, or practically anyone else you can think of.

A few quick comparisons are in order, which shouldn’t be taken as having great meaning without more substantial analysis. These show just how conservative the Republican House caucus has become in recent years, in light of the (also supposed) Tea Party fueled wave of 2010. The most conservative Republican in the House, Jeff Flake, scored -0.988. Compare that to the most liberal Democrat in the House, Barbara Lee (D-CA), scored -0.744.

Flake is not a member of the Tea Party and has been in the House since 2001.

That score is crazy high, but it is not representative of the entire caucus. What I’ve found is that when it comes to the absolute ends of ideology, conservatives tend to be far more conservative than liberals tend to be liberal. But it doesn’t take a long jog away from the fringes to find ideological intensity lining up, though.

The gap looks less impressive when you take the entire caucus into account. The average DW-Nominate score for the Republican caucus is -0.479, and -0.429 for the Democrats.

On the whole, the Democratic caucus in the House is less liberal than the Republican caucus is conservative, but not by much. At the very top, the GOP is far more extreme thanks to a handful of really out there southern Republicans. Tom Graves (GA), Ron Paul (TX), Jeff Flake (AZ), and Paul Broun (GA) all have scores exceeding -0.900, and there are ten Republicans with a higher DW-N score than the highest scoring Democrat.

What you end up with is a graph appears to rise gradually across 240 or so plot points until you get to the last ten people, and then the bars begin to increase dramatically in height over the last ten or so for the GOP. 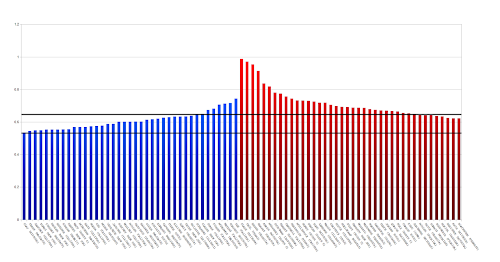 Each party likes to say that the other is far more extreme, and dominated by their extremists. It seems increasingly common for people to simply refer to the opposition party as extreme in its entirety, as if the extremes are all that exists. Well, neither party is dominated by extremists as far as the numbers go. Agenda is another issue for another day, of course. It’s possible for a party to not be dominated by extremists in numbers, while having their agenda be dictated by the small extreme minority.

But it is accurate to say that Republicans in Congress, or at least the House of Representatives, are less moderate and more extreme than their Democratic counterparts. That’s just a fact.

What that means, I leave to you to decide.

I was inspired to look up DW-Nominate scores because of this graph by Nate Silver. What I find interesting there is that Paul Ryan is a bit more conservative than Dick Cheney, noticeably more than George H. W. Bush, and Richard Nixon, by his ’52/56 score, would look like an extremely weak and unelectable “RINO” by today’s standards.