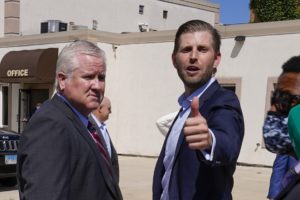 Subpoena’s are not requests that can be ignored, they are legally binding orders to appear and answer questions. As the process is supposed to go, a witness ignoring a congressional subpoena would result in the Senate/House referring the noncompliance to the U.S. Attorney General, who can then seek an order to obey with a federal judge, with sanctions like fines and even imprisonment as punishments. In practice this only happens when the congressional committee seeking the testimony is of the same political party as the Attorney General. Corruption is standard regardless of party. Republican AG Barr routinely ignores such referrals from Democrats in Congress purely for political reasons — Republicans don’t send Republicans to jail.

Eric Trump is in deep shit because he’s not being subpoenaed by Congress, he’s being subpoenaed by the State of New York. With him refusing to testify in New York’s investigation of Donald Trump’s businesses, the New York AG is the one who can take the matter before judge — and she will.

2. The fifth amendment does not allow you to refuse to answer every single question asked of you. You still must answer any question not covered.

3. Fifth amendment invocations are not absolute. It is up to a judge whether or no to accept your refusal to answer a question. If the judge thinks you’re using the fifth amendment to avoid answering questions in bad faith, he/she can hold you in contempt and fine you, and even jail you indefinitely until you do answer (or until the investigation ends.)

4. Here’s the big one: Eric’s father, President Donald Trump, can only pardon federal crimes under the separation of powers and the tenth amendment. President Trump can’t pardon his son to get him out of jail if he’s being detained for refusing to obey the New York AG’s subpoena, and Trump can’t pardon his son (or himself) if either are indicted for crimes as a result of the New York investigation.

The federal government’s safeguards against internal crimes and corruption have been shown to be completely toothless, but state powers are not.