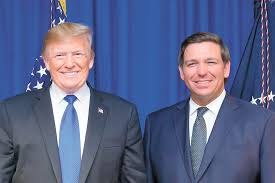 The Miami Herald has a very poorly written story published this evening and I’m just going to dive right into fixing the stupid mess:

That’s factually wrong. Businesses generally in Florida may require customers to provide COVID-19 documentation if they wish and this executive order can’t stop them. It would take a new law from the Florida legislature to change that, which hasn’t happened and probably won’t ever happen, since this is nothing more than Governor DeSantis throwing red meat to the far-right extremists in his own state whose support he’ll need to win the 2024 GOP presidential primary that everybody on the planet already knows he’s going to run in.

The first sentence in this story repeats the falsity of the headline, forcing the second sentence to lift a fairly heavy load to correct everything that came before it:

Gov. Ron DeSantis issued an executive order Friday that prohibits businesses from requiring customers to provide any documentation that they’ve gotten a COVID-19 vaccine to gain access or service. Businesses that do will not be able to get state grants or contracts, he said.

One example of this would be a President who wants marijuana legalized but can’t get Congress to do it, who then issues an executive order to the Drug Enforcement Agency to deprioritize the enforcement of laws regarding that specific drug. Something like ordering the agency to consider domestic non-business growing operations as its very lowest priority, effectively ending arrests and endlessly deferring existing prosecutions of amateur, personal growers.

What executive orders can’t do is create new law when it comes to anything outside the operation of executive branch. Neither the President of the United States, nor in this case Republican Florida Governor DeSantis, can “block businesses from requiring customers to provide COVID (sic) documentation.”

The second sentence there is lifting a very heavy load to fix the errors that came right before it. DeSantis can order Florida executive branch agencies to refuse to give contracts to private businesses that require COVID-19 vaccination documentation in order to do business with them. Such a tactic to end-run around lacking legislative majorities to pursue policy priorities is common. Democratic Presidents have used executive orders to prohibit the federal government from contracting work out to businesses that discriminate against gays in the past, for example.

Thus, the headline is factually wrong, and should say “DeSantis blocks businesses contracting with the state government from requiring customers to provide COVID-19 vaccination proof“, and the first and second sentences of the story are basically moot at that point and need not exist at all.

To further illustrate the wrongness of the headline, the story eventually admits:

In a follow-up tweet, DeSantis said he would push for the Legislature to enshrine his vaccine passport policy into Florida law.

Why would such a thing be necessary if the headline is correct when claiming that DeSantis has already banned all businesses in Florida from this behavior?

That aside, DeSantis really is behaving like a two-faced ass over this:

“People have certain freedoms and individual liberties to make decisions for themselves,” DeSantis said.

It’s odd to speak about the freedoms businesses enjoy while championing an executive order he just signed that takes away those freedoms, forcing businesses to operate only the way DeSantis personally wants them to, or else they will lose valuable government contracts. What DeSantis is doing is indisputably taking away freedoms from these businesses, inserting himself as a parasitic stealth CEO, an increasingly common exercise of personal liberty, free market-violating Big Government coming from Republicans.