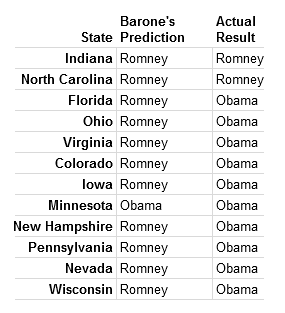 I’d like to think that the pundit right learned something from the 2012 election, but it doesn’t seem that way. When polls said Barack Obama was leading, they decided it wasn’t true, that those polls were biased and only they knew the truth. They were all “skewed” by firms in the bag for Democrats. Then Obama won the election proving that most pollsters were unbiased, non-partisan and spot on.

Republicans/conservatives were left with two choices: Again embrace the flawed logic that got them in trouble in 2012, or examine where they went wrong and fix what was broken.

They went with the latter.

Michael Barone finds it noteworthy that a poll has shown Mark Begich for the first time trailing one of his Republican challengers in Alaska. That race is important, if the GOP looks set to flip that seat then it’s almost guaranteed that they’ll walk away from November with control of the U.S Senate. (They could still do that even without Begich’s seat but it narrows their margin for error.)

Barone’s problem is that this poll came from Rasmussen, one of the most biased and inaccurate pollsters of 2012 (and they weren’t so hot in 2008 either.) It’s possible that won’t be the case this year, but history says it will be. Even if you remove the names from the pollsters and ignore their history, the Rasmussen poll is an outlier in Alaska that should be approached with caution.

Barone himself has (or should have) a worse reputation than Rasmussen. Five days before the 2012 election when all predictions should be final and no “things changed at the last minute” excuses should be tolerated, Barone predicted eight battleground states would vote for Mitt Romney: North Carolina, Florida, Ohio, Virginia, Colorado, Iowa, Minnesota, New Hampshire, Pennsylvania, Nevada, and Wisconsin.

With the exception of North Carolina, Barack Obama won them all. That’s not going out on a limb, it’s talking about things that you don’t understand. Barone should be the last person doing election analysis this year because of his history of being lead by his politics rather than the data in 2012, and nothing has changed since then.

Republicans may very well flip Begich’s seat this fall and win a majority of seats in the Senate, but right now at least when it comes to Alaska, the data says probably not. One contrary data point from a pollster with a history of getting things wrong hasn’t changed that.