The modern American conservative is completely full of shit

It’s a meme today to look through the Twitter history of conservatives to expose their behavior that just screams my entire life revolves around hating Barack Obama so much that I can’t think or act for myself, and all my political and world views are now defined by wanting the completely opposite of what Barack Obama wants today. Behold the intellectual four-year-olds of the world: 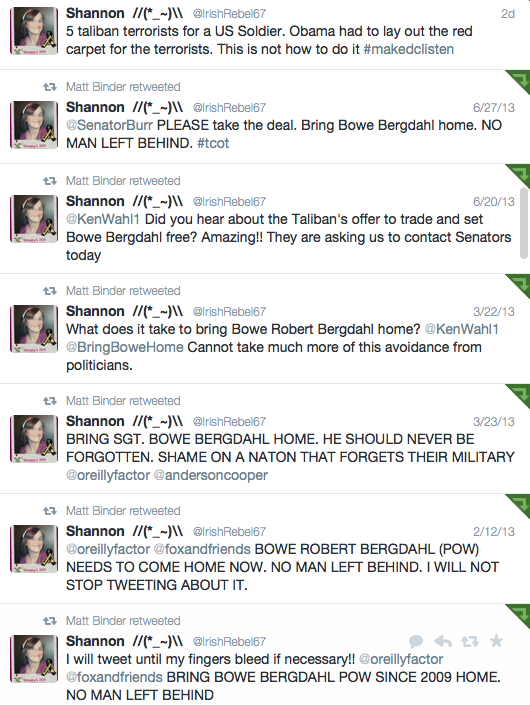 Random nobody? Not really, there’s more:

Republican Representative Mark Amodei Tweeted that the prisoner swap that brought home Bergdahl is the best news he’s heard in a long time, then he deleted it when his party decided to campaign on magically being horrified about a trade that a Bush administration official says George W. Bush would have done himself. (Nevermind the unmatched stupidity coming from Fox News where having a beard makes you a terrorist, a view I think Jews might find problematic and probably antisemitic.)

I keep hearing that not everything is about Barack Obama, that Republicans don’t define themselves and their party by opposing every single thing that Barack Obama wants or does. Except that’s precisely how things are now. Every time a small business tax cut comes up in the Senate it’s filibustered by super-ultra-uber-pro-small-business Republicans. The GOP basically invented Obamacare (Paul Ryan’s health care plan has insurance exchanges, the Heritage Foundation invented the individual mandate to buy insurance, the 2012 GOP Presidential Nominee Mitt Romney wrote and implemented Obamacare in Massachusetts, George W. Bush’s Medicare Part D has the risk corridors the GOP has now taken to calling a secret insurance industry bailout, etc). Republicans oppose every military action Obama takes and advocate every military action he opposes. This isn’t a matter of Republicans in Congress naturally opposing the policies of a Democratic President — Republicans have in the past supported nearly everything I just listed until Obama wanted it.

It’s frightening to think that people of this mentality will be running the Senate next year — are already running the US House of Representatives — or that they hold political office at all. Conservatives politicize everything (example one, two, three), ignore real scandals and even support them enthusiastically, say the opposite today of what they just said yesterday, ignore facts, and apparently are so stupid that they can’t tell the difference between a walker and a patio chair.

The Republican Party is not a legitimate political party and hasn’t been for quite some time. When will people realize that and stop putting these little shits in positions of power where they tend to ruin basically everything they touch?

On the related topic of Bergdahl, there are some serious problems developing with the GOP’s ridiculous behavior. It’s a military code of sorts from what I understand that “nobody gets left behind”. Apparently the GOP didn’t get that memo or doesn’t agree with that sentiment, and that’s not debatable. The very second conservatives said this exchange of prisoners was a bad deal, they implicitly rejected the code that no prisoners be left behind and implied that every soldier’s life has a price, and that Bergdahl’s life wasn’t worth five Taliban prisoners who were probably going to be released from Gitmo as free men anyway.

Which brings me to this: do people really not understand what America has been doing in our little Cuban gulag over the past 12 years? Not one of the five Taliban prisoners had ever been charged with a crime, much less convicted. They were being held without trials probably in violation of the US Constitution and almost certainly in violation of international law. These aren’t terrorists convicted of bombing a subway, these guys were senior members of the Taliban that were taken prisoner in the second year of the Bush 43 administration in the blunder of a war in Afghanistan — people that probably should have been released years ago where were arguably guilty of nothing more than defending their country.

It’s easy to forget that the Taliban was running Afghanistan in 2002 which makes these five prisoners POWs whether we like it or not, which is why holding them all this time was probably illegal and setting them free was inevitably the right and legal thing to do. It has been noted by others in this debate that prisoner swaps, by the way, is typically what one does at the end of a war. It’s what the United States and Japan did after World War II.

Can you imagine anyone in this country gleefully suggesting that the US hunt down and execute recently freed Japanese prisoners after World War II? I’ve seen a lot of sick people wishing we’d tagged the Taliban prisoners with some sort of radio so that we could immediately find them and execute them with drones. No thought given to due process, or the fact that US drone strikes have a disturbing habit of missing accused terrorists and hitting civilians by the dozens. Who cares if these guys never actually did anything wrong other than fight to defend themselves against foreign invasion and occupation. Even with everything Congress has done to rig military tribunals by taking away the rights of the accused so that they literally cannot defend themselves, these five Taliban prisoners still couldn’t be charged and convicted with anything.

I can’t judge if they were good or even horrible people, that’s really beside the point. What matters is that we’ve all fallen so far in such a short amount of time that the rule of law, the right to contest guilt, and basically every superior moral code that supposedly set us apart in the world has become a joke. What matters is that so long as it’s not one of us, who cares? Kill them and move on to the next one. Innocence and facts be damned. Just make something up, kill the bad guys, be two-faced and get what you want at any cost.

America the great.. no more.