Thoughts on the VP debate 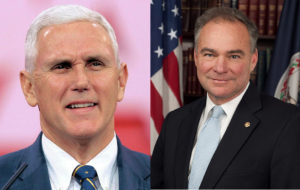 My hot take on who won the Pence vs. Kaine debate is that Tim Kaine won simply because he did his job being a proxy debater for Hillary Clinton. Mike Pence lost because he pretty successfully pitched the 2016 Republican Party agenda — a good bit of which his running mate doesn’t support — instead of being a proxy for Donald Trump.

Pence did exactly what he knows how to do: argue for himself.

Had this been Pence vs Kaine for a Senate seat, Pence wins because of that. But it’s not. Pence did zero damage to Hillary Clinton and Kaine, by repeating a lot of the unpopular and contradictory things Trump has said, reminded people they aren’t voting for Mike Pence, they’re voting for Trump. And Pence just didn’t want to do that.

Things To Keep In Mind

This debate will be forgotten when the next big story hits the wires, regardless of what it is, because we’ll be back to judging how much that story helps or hurts Hillary Clinton and Donald Trump. Then we’ll really forget about it when Clinton and Trump hold their next debate.

Online polls are always useless. I’m not talking about digital surveys here, Google Surveys was the second most accurate pollster of 2012 and it was done entirely online. The kind where you don’t have to register to vote, where you can make as many account as you want, even if they are hosted on a respected news organizations website, are junk.

Viewer panels and focus groups are junk as well. Their sample size is way too small to be representative of even the TV audience, much less the voting population of a single state, much less the entire national sentiment. And I’ve never seen a news organization (they might but I’ve never seen it) publicize their methodology for building those panels anyway.

The best, most reliable polls will have solicited responses for at least three days starting Wednesday the 5th, which means they may not be available until as late as Monday the 9th. There may be some legitimate “snap” polls out later this week that only cover a single day. Be wary of them. 3-5 day polls are infinitely better.

The least complicated and nearly the most accurate way to judge the state of a national race is to average polls. Pollster has Hillary Clinton up 48.3% to 42.3%. This isn’t terribly useful even 34 days out. I’ll go into detail about what to make of polls shortly, but the key points are:

Good luck with the spin. The basic facts of this year’s race is that Hillary Clinton has been the favorite to win and she still is. Chances are very good that she will be next week too.