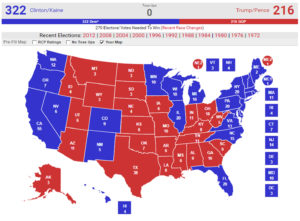 If you just want my prediction, here it is:

If you’d like to know why, then there’s four things you need to know about polling right now:

1. National polls don’t matter. They’ve never mattered and the media should stop using them. US Presidential elections are decided by state votes, whoever wins the most electoral votes – each state has at least 1 and the number is based roughly on population – wins the Presidency.

Hillary Clinton will easily win California and its 55 electoral votes. That number – 55– comes from the total number of Representatives and Senators the state has, with the former being based on population determined by the most recent census. California has the most EVs because it has the largest population, while North Dakota has 3 EVs because hardly anybody (by comparison) lives there.

It takes 270 EVs to win the election.

2. Individual polls don’t matter as much as an average of polls over time – a trend line, in other words. An average lead of 1.5 points less than 24 hours from election day is actually quite strong, far more so than a single-poll lead of 5 points taken a full before people can vote.

3. All polls lose some usefulness once early voting begins unless they account for people who have already voted in their samples. I’m not aware of any polling firms that do this.

4. Polls with very small differences (+/- 1.5 points, again) can be very carefully augmented with early voting data if it’s available. If a candidate is leading by 1.5 points in a state where their party also has a meaningful lead in early voting, that 1.5 points is stronger than it looks. Then you have data confirming the poll.

5. Polls are almost never biased towards Democrats/liberals. In states where we have data on voter registration, and from party identification polling from firms like Gallup, we already know for a fact that more Americans identify as Democrats than they do as Republicans. A poll that has 8% more Democrats responding to it is not biased, it’s an accurate reflection of the political makeup of the country. That’s bad news for Republicans because if every Democrat and every Republican voted in every Presidential election, the Republican candidate would never win. The bad news for Democrats is that if you could say that Democrats own the youth vote, then Republicans own the elderly vote. Young people talk a good game but they aren’t very motivated, while older voters have higher turnout. That’s why elections end up as close as they do.

With that small poll primer, to predict who will win, your process should look something like this:

1. Add up all the states where each candidate has a safe lead. States like California and New York can automatically go to the Democrat, and Texas can go to the Republican. Most analysts will do this for 34 states, give or take. Already the Democrat will have a substantial lead in the electoral college at this point. Republicans have more safe states in total, but many of them are rural states with few electoral votes. Democrats have fewer states but they are more populous. Clinton starts at 272 electoral votes and Trump states at 216. This is pretty close to how Barack Obama started in 2008 and 2012, and how 2016 and 2020 will begin. If Arizona and Texas mirror Nevada over the next decade than this could really get out of hand for Republicans if they don’t find a way to appeal to more voters.

2. Analyze recent polling for the battleground states. Some BG states are closer than others and can be counted for one of the candidates without much leg work. Colorado for example, close as it may be, has been stable most of the year. It’s not much of a battleground in 2016.

3. Heavily scrutinize the last five polls, or polls for the last seven days — whichever gives you the most data – for the remaining states. This gets tricky. If the last four polls look like this:

…but an average of polls in the three months prior all show Clinton leads, you’ll have to analyze new voter registrations, early voter data, demographic changes from the prior election, and even how many field offices each candidate has in the state to consider their “ground game”. Some people will take into account differences in wealth, education, and job loss or growth. The digger you deep the more you risk introducing noise. In fact you’re probably only doing that. And I don’t believe it’s necessary. All I used for predictions in 2012 was public polling and I only missed a single state.

…even in a state where Clinton may have lead on the average for the past month can probably go to Trump. It looks like it flipped. There is a point where the short-term average can outweigh a long term average, like when you’re right on top of election day.

4. If you have it, consider early voting data. This one is what I ended up needing for predicting Nevada, North Carolina, and Florida. I’ll explain that in a moment. Here’s where I see most states landing:

Based on what I consider safe states, Hillary Clinton already has enough to win by 2 electoral votes. Here are the swingiest swing states:

Donald Trump could win them all (literally he could), but he still wouldn’t have enough electoral votes to become President. He’d need to carry all three and at least one more state worth a minimum of 4 electoral votes – which is also possible. It’s just not likely. Of the states I’ve seen early voting data for, Democrats are leading in Florida, Nevada, and North Carolina. That’s why I’m predicting Hillary Clinton to win all three.

Ready for the gritty details?

There have been six polls here between October 26th and November 6th: (oldest to newest)

The short-term trend: Trump wins the average (+1) but he’s only lead a single poll in November (the other came in October) and that came from a partisan (Republican) firm that has only polled the state a single time this year. I don’t find them very credible. Without Trafalgar this trend favors Hillary Clinton.

Early voting data: Democrats are leading in North Carolina, which favors Clinton (and Roy Cooper, the Democratic candidate for Governor.)

The long-term trend: Hillary Clinton lead in an average of polls from October 3rd until November 2nd – with her falling behind largely due to Trafalgar Group.

Note that I’m not just taking a poll that I don’t like based on what it found and throwing it away, I’m weighing it based on the pollster’s (lack of) credibility, because Trafalgar has none with me. I have no problem with the WRAL/SurveyUSA poll that found Trump up by 7 (other than that seems like an outlier due to its size). If I mentally discount the likelihood of Trafalgar’s poll being accurate then the near-term trend changes substantially. That’s exactly what I’ve done. It’s a judgment call and you’re free to make your own.

The story for Nevada is very much the same as it is for North Carolina; Hillary Clinton lead an average of polls between October 3 rd and November 2nd, with both candidates leading the few November polls we’ve had. Trump been up by 1 and 6 points, Clinton up by 2 and 1 point, and there’s a tie. Again, the near-term (with no weighting of any kind) favors Trump, but just barely – this time by 0.8 points – while the long-term trend favored Clinton.

But again we have early voting data for Nevada where Democrats are leading Republicans. As with North Carolina a change in the short-term poll average is less meaningful when we have hard data on voting trends. It may very well be that voters soured on Hillary Clinton in Nevada and North Carolina in the first week of November, but that only matters if a serious chunk of the electorate hadn’t voted before November began.

In both states it has.

Florida is the only state I missed in 2012, and I missed it by less than 0.5%. I called it for Mitt Romney and I believe Barack Obama won it by less than 0.5 points. I’d rather not miss any this year so I’m going a bit more with my gut than strictly on polling data. Strict polling, to me, says Donald Trump wins Nevada, North Carolina, and Florida tonight – but it also told me that Romney would win Florida and he didn’t.

There have been seven polls of Florida recently with Clinton leading 4, Trump leading 2, and there’s a tie mixed in the middle. Trump’s leads of 3 and 4 points are larger than Clinton’s leads of 2 twice and 1 twice mean he leads in the average (+0.2).

Similarly to Nevada and North Carolina, Hillary Clinton lead with solid averages from late September until late October. But again, Democrats are leading in early voting in Florida. My gut tells me that Trump’s (relatively small) surge in these three states in the last week of polling just won’t matter because so many people have already voted, and they aren’t showing up in droves for his party.

For those curious, Republicans are leading in early voting in Arizona, Colorado, and Utah. I’ve already given Arizona and Utah to Trump so an early vote lead for his party there won’t matter. It’s rather what you’d expect to happen in those states. Trump needs to have early vote leads in swing states, not safe states.

But what about Colorado? I gave it to Clinton as a safe state, yet Republicans are leading in early voting. The reason I did that is simple: all trends favor Hillary Clinton in polling. She has lead Trump from July 13, 2016 until September 26, and then lead him again from October 2nd until today. The last 7 polls of the state are: Clinton +5, Tie, +5, +1, +6, Tie, and +3. Trump hasn’t lead a poll in the state since the first week of October. Early vote lead or not, what you’ll probably see there is Republicans benefiting at the state level, not Donald Trump.

It’s been nearly four years since I left the political journalism scene, and my only regret is the judgment day on my work known as election night. Weeks worth of analysis and reporting is either proven accurate, and therefore useful, or you learn that you have a lot of work to do to understand how this corner of the world has changed.

But I’m glad it’s gone. I found something else to fill my life with and I don’t ever intend to change that.