A pathological liar never stops lying, even when there’s nothing to lie about. Republican Trump (look — never forget the man is a Republican, and that practically the entire professional party establishment backs and supports his racism, lying and stupidity at every possible opportunity) went someplace he wasn’t wanted, to Dayton, Ohio after the most recent mass shooting event there. Political opponents criticized him for his unending racism but actually praised his behavior for the duration of that visit.

So what is a liar to do about that? Well, lie some more, of course: 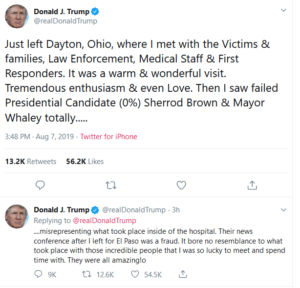 Actually it’s not clear to me whether Trump lied about the press conference here, or is having a moment of senility, and he’s not capable of understanding what’s going on around him. Regardless, Senator Brown and Mayor Whaley didn’t misrepresent his trip, in fact they praised it:

At a press conference following their joint hospital visit with Trump, Brown said Trump was “received well by the patients,” was “comforting” and “did the right things.” At the press conference and in an interview with CNN, Whaley said victims were “grateful” to see Trump and that he was “treated well by the victims, for sure.”

Brown did call Trump and his past rhetoric “racist.” Whaley called Trump’s past rhetoric “divisive” and said it was good he did not visit the district where the shooting occurred because of local “anger” about him.

But neither of the two Democrats alleged that Trump was badly received at the hospital.

Read the entire story, it clearly lays out what Trump did and didn’t do while in Dayton, and what Brown and Whaley said and did not say about his trip. It’s abhorant that the entire trip was because of a mass shooting in which many innocent people were murdered, and as soon as he leaves — a trip meant to comfort survivors — all Trump can do is make the entire thing about himself and literally paint himself as a victim of some sort.

What a menace and a disgrace. 2020 can’t come soon enough.

Update: quick note, the Department of Homeland Security during the Trump administration de-prioritized domestic terrorism according to The Hill.