If you censor a Gay Jesus comedy film off Netflix for being offensive, religious content you enjoy may be next 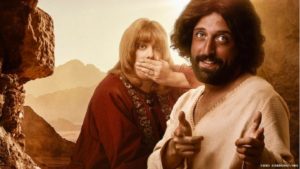 I’m spending an unreasonable amount of time shitposting on Twitter today, trolling Christians who are pleased that a judge in Brazil is trying to order Netflix to remove a film that depicts Jesus as being gay (unseriously, I think it’s a comedy, so it’s not even politically provocative.)

In the midst of my mayhem-in-a-bottle is a very serious point that I’m sure few Christians who think this is a good thing are willing to consider: if a government official (be it a judge or a lawmaker) begins forcing media companies to change their business practices because it’s offending their personally subscribed-to faith, what happens when the judge or lawmaker(s) in question aren’t say… Christians?

Will they be so gleeful and thankful if a judge orders pro-Christian content off of Netflix because he’s a Muslim, and somebody found that content offensive?

I somehow doubt they’d be quite so supportive, which is why it’s almost always a good idea to keep religion out of government and government out of religion). In non-secular states, you may find gay Jesus offensive, but nobody is forcing you to watch it, and nobody is taking content you enjoy that they find offensive and forcing it of the air. You can make offensive content go away simply by not paying for a company to deliver to your TV/computer. And so can everybody else.

That is a far better bargain than every person of every faith forcing private companies doing legal business to censor themselves to cater to every person and every whim in the world, leaving media companies like Netflix with no meaningful content at all because you’re all a bunch of thin-skinned, satfe place-needing snowflakes who simply can’t tolerate something you don’t personally like being allowed to exist in the world.

Stop being dicks and just change the channel if you don’t like it, or tomorrow it may your favored content getting the ax at the hands of a government suit.

P.S. if you think this is all a big joke, the comedy group who made this flick had their offices firebombed over it. Not content to merely sue their creation out of existence, somebody tried to kill them for it. Religious extremism is far from limited only to Islam in this world, you know.